Rotary Club of Muthaiga was issued with a charter certificate dated 22nd May 1997 and the official charter night was conducted 27th June at a colorful ceremony at the Safari Park Hotel. The ceremony was presided over by Chairman John Wright of Westlands Club, with a total of 38 (Thirty Eight) Rotarians becoming charter members.

After nearly 10 years, we still have 6 Charter members amongst our ranks. They are Robert Foulser, Gerald Nyaguto, Sundeep Raichura, Kaushik Manek and Peter Hurst. At one time Rotary Club of Muthaiga held the Regional record of having the most married couples, all of whom were Rotarians in their own right, at six couples.

After establishing the Club at the Esso Mall, our meetings were held at the Muthaiga Golf Club, and we spent many happy years there. In 2002, we relocated to our current home at Mayfair Hotel. Our Club logo was designed by Rotarians Zia Manji and Monty, along the lines of the days of the ‘Happy Valley’ set whose antics were the highlight of the famous Muthaiga Club, in times long gone.

Song of the Rotary Club of Muthaiga

Tune based on 'JAMAICA FAIRWELL (by Harry Belafonte)

As The Rotary Club of Muthaiga…

The Four Way Test of the things we think, say or do

Is it the truth?

Is it fair to all concerned?

Will it build goodwill and better friendships?

Will it be beneficial to all concerned? 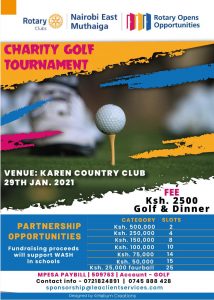